Safe driving on winding roads
In this section, we have tips for staying safe on winding roads. Perhaps you're aware of these basic principles already, but many drivers are not. A little refresher course might be useful! 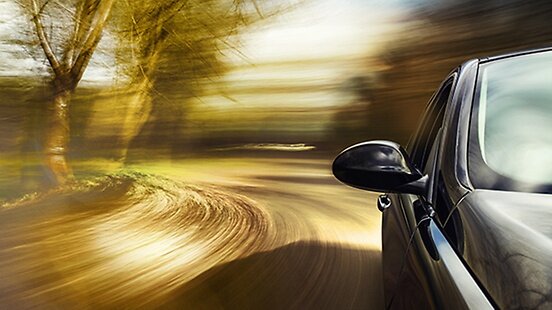 Whether you're new to driving or already experienced behind the wheel, the rule is the same for all users on the road. You must avoid driving at an excessive speed on a curvy road. This principle holds true for both a winding road around a hill or a quiet roundabout in a suburban town.

You will often see road signs that warn you of an approaching curve with a recommended speed limit. But why is a winding road so potentially hazardous in a driving situation? Because when a vehicle turns along a bend, there are two distinct types of motion taking place.

First of all, there's the momentum of the car moving forward. Secondly, inertia of the vehicle's body comes into effect as it follows the curve around. Centrifugal forces will try to push the car outwards, and the tires will have to work harder to resist these forces as they navigate the curvy road. If a driver turns on a bend at a speed that's too high, the tires will gradually lose their grip and begin to skid.

Tips for driving on a bend
In addition to driving at a slow pace, there's a useful technique for winding roads; try to turn the steering wheel as little as possible without crossing the central line.

Please note: this is not a recommendation to completely cut across the inside of a bend on a public road; that would lead you into the path of oncoming traffic and would endanger other drivers.

Rather, the advice is for drivers to make sensible use of the width of their lane, so they can take the curve more easily and improve their view around it. Turning the wheel as little as possible is the key.

There are three steps to drive through a curve safely:

When approaching a curve, slow down appropriately and position your car to the side of your lane which is opposite the direction of the curve. If the road winds to the right, for example, move to the left side of your lane.
As you continue to drive through the curve, smoothly position your vehicle towards the other side of your lane.
When approaching the end of the bend, gradually ease back to the normal position in your lane, then accelerate out of it in a straight line.
This driving technique follows the line of the widest possible arc; it reduces the severity of a curve, and thus places less stress on the tires and reduces the risk of skidding out of control. Moreover, drivers have a more unobstructed view of the road ahead and more time to react to any hazards.

And on that point, you must stay alert for other drivers and traffic while rounding a curve. If other vehicles are too close to the center of the road while you're driving through a curve, it could put you at risk of a head-on collision.

Tips for regaining control in a skid
If the vehicle does begin to skid on a winding road, drivers mustn't react with panic when they find that the brakes, accelerator, and steering wheel aren't working as usual.

Instead, they should take their feet off the brake and accelerator. Both hands should remain loose on the steering wheel, but not make any sudden movements.

The critical thing is to avoid oversteering and hitting the brakes too hard. After the vehicle has had time to slow down, regain control safely; gently apply the brake and begin steering again.